Okay, so literally minutes after commenting on Lita’s Anime Collecting Tips post (which has lots of great advice on planning, researching, and shopping around for anime that you really want) I neglected all that advice when I found something I couldn’t pass up.

I had mentioned that I was looking for the Your Lie in April blu ray release for a long time. After becoming captivated by the series on Netflix, and then seeing how much the series would cost to own, I was deeply dejected. I don’t part with money very easily and at a price of roughly a car payment, it just seemed out of reach.

This collection became my white whale; an elusive prize. I told myself if ever I could find it for a reasonable price, I would nab it without a second thought.

Imagine my surprise when our treasurer, Mozart (pictured below), agreed to spring for it when we came across it on RightStuf (at about 60% the price I saw on Ebay). 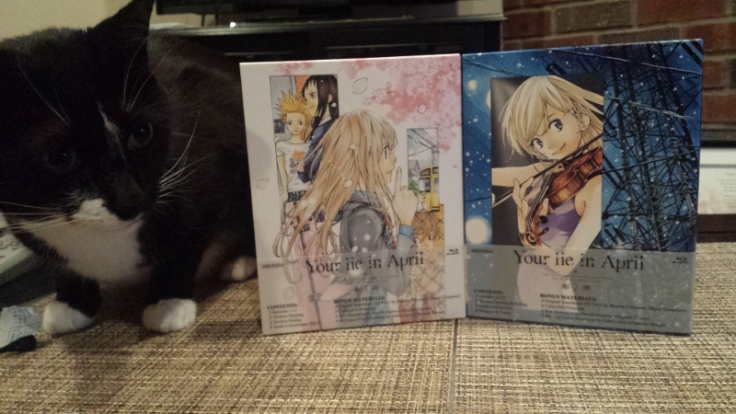 Imagine my further surprise when I remembered he can’t budget at all and that the club has no funds, so it ended up coming out of my pocket instead. Thanks Mozart.

Anyway, while the price tag hurt a bit, what I got out of it was pretty great. Each of the two boxes come with 3 blu ray discs, a soundtrack CD, and a set of 3 art cards. I took a couple more pictures (please pardon the bad lighting) so you could see what it included. 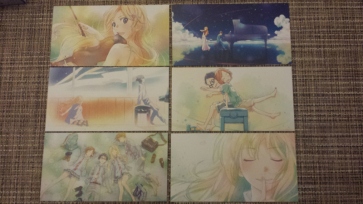 The blu ray discs come with audio commentary for episode 1 and 22 from the sound/voice director, along with the English actors for Kousei, Kaori, Tsubaki, and Watari. They’re pretty entertaining, and a little touching, offering some behind the scenes insights into the work they put into this production. There is also a hilarious blooper reel, which I had never seen before, so that was great.

For those of you who checked out Lita’s post, you should most definitely follow her advice. But every once in a while it feels nice to get something that means a lot to you, no matter what. Even if it means I won’t be getting anything else for a long time, I’m glad I got this. It’s sure to bring me plenty of joy in the years to come, if not also plenty of tears.

Especially when paired with this, which came in not that long ago:

7 thoughts on “An Impulse Buy”