When an overconfident Chuuta tries to stop a shoplifter, things take a turn for the worse. Though he is nearly consumed by his feelings of guilt, he begins to get more serious about his position with the ēlDLIVE police force.  While this is a positive step for Chuuta, not everything is as it seems.

It seems the main protagonist, Chuuta, is slowly progressing with each episode. In the premiere episode, Chuuta unexpectedly faces off against an alien disguised as a teacher. The second episode, he reluctantly accompanies Misuzu on a mission to apprehend a fugitive and ends up pondering whether he can truly serve ēlDLIVE police force. In the most recent episode, Chuuta requests to be a part of a mission to capture a gum stealing thief (yes, you read that right). Despite the comical depiction of the criminal, this can be viewed as a turning point in the series. It is a silent acceptance from Chuuta that he is capable of fulfilling the duties required of him.

Viewers may also surmise by this point that Dolugh is a manifestation of Chuuta’s self confidence. Due to their emotional connection, Chuuta’s negative thoughts hinder Dolugh’s abilities. Similarly, Chuuta’s newfound assertiveness is noted by Dolugh, praising Chuuta for his growth. 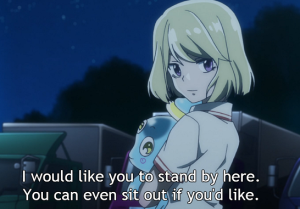 For all the growth Chuuta is experiencing, Misuzu is falling victim to the standard tsundere archetype. Being that she is the main female protagonist, possessing an unyielding determination and loyalty to ēlDLIVE, it’s very disappointing that her character isn’t being written to showcase her full potential. With each episode, I anticipate witnessing some sort of development from Misuzu — an explanation as to her standoffish attitude, softening her icy resolve towards Chuuta, or self-reflection on how her behavior might be negatively impacting her duties.

While I can’t say that ēlDLIVE will manage to break free from the redundant formula of archetype characters and rehashed episode plots, seeing the growth in Chuuta has given me hope!

Good
– Growth and development of main protagonist, Chuuta
– Potential variation from standard plot line; due to cliffhanger in last episode

For the third week in a row this series is sticks to the same basic formula it has been using thus far. Chuuta goes through some introspection, some sort of alien criminal makes their way to earth, and Chuuta et al defeat it. This time things are different though, because Chuuta has begun to accept more about himself and his place within ēlDLIVE. While it may see like things should go swimmingly from here on out, there is a lot that Chuuta has yet to understand. In fact, as Misuzu puts it, he only understands “about 30 percent.” With Dolugh increasingly serving as a stand-in for Chuuta’s thoughts, he helps piece things together for him and the viewer when the inevitable confusion occurs. 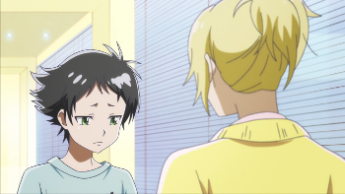 The series has followed a steady pace in introducing viewers to its universe. In this episode Chuuta learns that SPH, the source of the power that he and others use, actually stands for Space Pheromone (which of course gives him a new way to sound like a pervert in front of Misuzu). Another lesson he learns after a harsh experience is that his ability, and Dolugh’s ability to manifest, is related directly to his confidence. Like anyone who has been a loner most of his life, Chuuta’s confidence is shaken when his actions create trouble in others’ lives, but whereas before he might have retreated into familiar obscurity he now treats his despair as a call to action. He shows some initiative for the first time in volunteering to catch the villain even when Bricke counsels his team (consisting of Misizu and Inspector Chips) to stay out of it.

It helps that the villain isn’t especially threatening this time, whose only crime on earth was merely shoplifting some gum, though that doesn’t make him a pushover. A sudden shift in the situation forces Chuuta to think fast to find a solution (albeit at Dolugh’s prompt). It affirms that his power might only be limited by his imagination, as Dolugh is able to manifest an impressive ice based power when Chuuta pictures it. Subduing the villain seems a matter of course now, but a surprise explosion reveals that there was more behind this than a simple robbery.

Regardless, Chuuta begins to see how his latest experiences have changed him, and begins to believe he has a higher calling with the space police. The next episode teases some danger targeting him in particular, and it seems like the introductory arc is all but over. Successive episodes may thicken the plot, but we’ll have to wait to see if they achieve this.