Masamune is planning his strategy to get revenge on Aki by reading the shojo manga, “Barasute,” but Yoshino tells him he’s doing it wrong. Rather than the aggressive approach he’s been using, Masamune tries to get Aki to pay more attention to him by ignoring her. As usual, things don’t end up the way Masamune planned.

In the beginning of this week’s episode, the protagonists have seemingly reverted to their old ways. Last week, Aki displayed kindness and naivety during her date with Masamune; both traits viewers had not seen much of from her. In turn, Masamune was starting to question how important seeking revenge on Aki truly was to him.  For some unknown reason, his feelings began to shift once more as Masamune attempts to seduce Aki (using lines from shoujo manga no less). His plan again is to trick Aki into falling for him, only to dash her hopes in the most humiliating way possible. 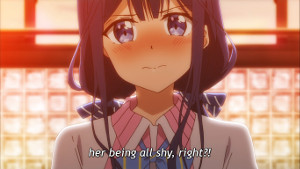 At the start of this episode, I was disappointed that Aki and Masamune easily regressed back into their original habits. It seemed to destroy all the significant character building that had happened during their date.  When Aki’s uncertainty in the second half of this weeks episode appeared, it was a welcomed display of vulnerability meant to compliment the side of Aki not everyone is privy to seeing. What was missing is an explanation as to why Masamune chose to continue with his revenge plan after recognizing and sympathizing with Aki’s kind, naïve side.

At the end of the episode this week, Masamune again rescues Aki from danger when she almost gets hit by a car. While I thought to call out Masamune’s Kirito/Gary Stu persona again, the moment had me thinking… “aww!!!”  If there is any question that Masamune is meant to be a Kirito-like character, he did end up finding his “Asuna” this week.

Good
– Interesting plot twist/cliff hanger towards the end of episode.
– Aki’s vunerable side, beneath her aggression, is realistic and relatable

Bad
– Masamune’s personality characteristics could benefit from being explored more.

The recognition of Aki’s sweeter side that came at the end of the last episode seems to have evaporated, as Masamune is still hard at work trying to win Aki over just so he can humiliate her afterward. The fact that he’s studying shoujo manga to perfect his tactics is a a rather humorous commentary. Media depictions certainly influence the way boys and girls think about each other, and Masamune’s immature expectation that dramatic gestures of charm are the key to winning Aki’s heart is laughable. It’s no wonder Yoshino echoes Aki’s opinion of him as “creepy” after he tries it. 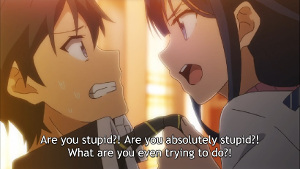 Of course, Yoshino came prepared with an alternative suggestion aimed at getting under Aki’s skin another way by backing off to the point of ignoring her. While this works to some degree, Masamune’s inability to capitalize on it leads the plan to somewhat falter. Aki’s suspicion reaffirms that she’s not just a stuck up dummy like the cosplay incident suggested, but rather than let this take the narrative backwards to a point where she is needlessly dismissive of Masamune, it gives viewers a chance to see how she really feels about all this. Some quick flashbacks show that there is some pain associated with a past relationship that has led Aki to be as cold as she is today. Trusting that another person likes her, especially when he can’t explain why, is understandably dubious.

The final scene touches upon a point that I’ve been bringing up as I discuss the show with others, in that there is a vast difference between the ‘prepared’ and ‘impulsive’ versions of Masamune. Earlier in the episode, after witnessing Aki’s weakness, he has to mentally talk himself into not finding her cute. Later near the end, he rescues her from being hit by a car and asks what he would do without her, before shyly admitting that he’s being too harsh. These things make me continue to think he’s is falling for her, whether he knows it or not.

What the appearance of the new character at the end means is yet too early to determine, though her actions have Yoshino written all over them. I wouldn’t be surprised if she’s part of the plan, but whether Masamune is a bystander or target in that plan is unclear.