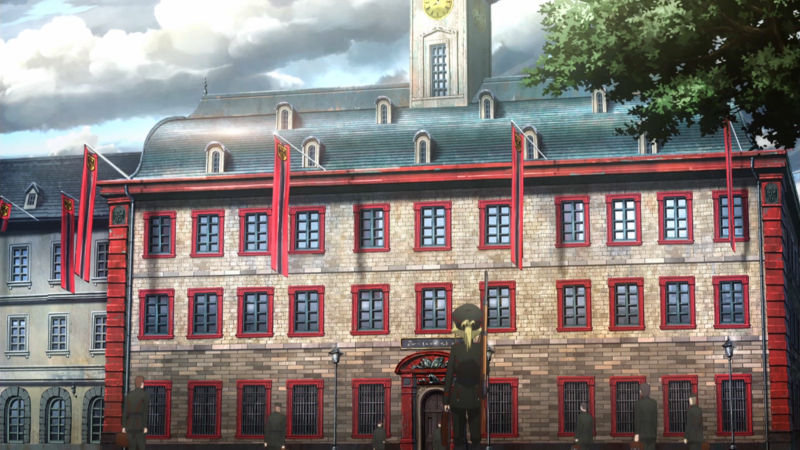 Six months have lapsed since last week’s episode and Tanya is now enjoying a comfy life in a military college. Despite every move being carefully calculated for a career away from the front lines, she may have gotten too zealous about showing off her insight.  After making a positive impression on General Zettour, Tayna is asked to write a proposal about a Mage Battalion unit. Little does she know her intellect will impress more than just the General.

This episode was another example of my technical inaccuracy last week when trying to explain how a series’ narrative is progressing (the other being the virtually episodic Onihei). I claimed last week that the series had caught up to the events of episode 1. What we see instead this week is Tanya’s reassignment to the Academy prior to that ep. and the result of her time spent there.

Looking out for her well-being first and foremost, Tanya’s place at the Berun Academy means she doesn’t have to worry about being shot at or blown up. Regardless, she knows that her time at the Academy isn’t permanent so she does her best to excel in order to land a favorable rear echelon position. Her interactions with her fellow ‘students,’ mild and compliant thought she may seem, are marked with the same self-serving attitude she always bears. When Chief of Staff Zettour takes notice, however, we see Being X’s influence subtly pushing Tanya into unfavorable ground. 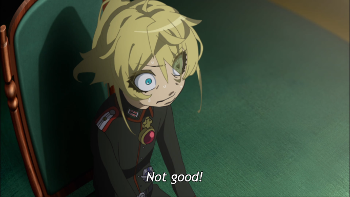 It’s amusing to see Tanya, so smug in her intellect and career strategy, be played so easily. As sharp as she was in her previous life, she’s completely outmatched by Being X who we saw guide Zettour at the end of the last episode. Cleverly outlining what her battle strategy would be at the General’s prompt, she digs her own grave deeper and deeper, as viewers know what becomes of this plan. The rapid response unit that we see Tanya part of in episode 1 matches her suggestion to the letter. Her subsequent invitation to a dinner celebrating her advancement is also merely a formality to force her to accept a position at the head of Mage battalion instead of the several other offers technically open to her. Even her plan to stymie the operation by sabotaging recruitment is an utter failure when she gets stacks of applications rivaling her height to go through.

I won’t stick my foot in my mouth and say that this catches us up to ep 1 again, but it feels like we’re getting there. As it stands, Tanya the Evil continues to spin our reincarnated protagonist in the web of fate, and her futile attempts to avoid the front lines may yet prove to her that she can’t escape God’s wrath.

Good
– Tanya is played like a violin, and her shock at being outdone is priceless.
– A little extra background on Tanya actually goes a lot way.

Bad
– Less military fanservice than usual, but it’s only bad if you care about that stuff  >.>
– At four episodes in a second act will need to start soon.

The plot picks up six months after the events of last week’s episode, as Tanya adjusts to military campus life. Being the calculating person she is, Tayna is focused on subtle, strategic moves that will allow her to remain in rear echelons. In keeping with the series theme, Tayna’s minor victories towards making her career as undemanding as possible are overshadowed by heaping servings of just desserts. 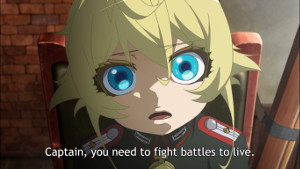 Tanya’s latest personal mission is to talk Captain Uger out of a promotion that she is vying for. His reason for seeking the career change is to spend more time with his young daughter, away from the battle lines. Being near the same age as Tanya, Captain Uger fears his daughter will be drawn to the military lifestyle. In a cunning example of mock empathy, Tayna expresses how the Captain should be determined to fight battles now, so his daughter will not have to in the future. In actuality, she is playing on her opponents guilt and trepidation to dissuade him from the position she is after.

During another meeting with General Zettour, Tanya again attempts to manipulate her way into a cozy strategic planning position away from the front lines. Seemingly impressed by her thoughts on a Mage Battalion, Zettour encourages Tayna to write up a proposal. This leads to a full comeuppance for Tayna, as her insight leads to a promotion (right back to the battlefield). Despite her best efforts to discourage applicants from applying for the Mage Battalion, Tayna soon realizes that she cant stall forming the new unit for long.

It will be interesting to witness how the narrative will progress. When or how will Tayna’s mock empathy shift towards true compassion? What will be the turning point to her ‘awakening?’ Will it result from an event manufactured by Being X or will Tayna’s own efforts to coerce a situation invoke a pivotal change of heart?

Good
– Tanya is being given her just desserts!

Bad
– Still waiting for this whole battle that viewers keep hearing about.

2 thoughts on “Saga of Tanya the Evil – episode 4”