Kanai confesses his feelings for Akane, much to the heartbreak of Hanabi. She soon realizes that Akane has a dark, twisted desire to string him along, only to watch Hanabi suffer. Pondering whether or not to reveal what she has learned to Mugi, she instead finds herself seeking comfort from Ecchan. This leads Hanabi to wonder if she and Akane share similar, scum traits.

Ever since grade school, Akane-sensei has thrived on the attention men lavish on her. A twisted thrill consumes her when other girls are left heartbroken. This becomes the driving force behind Akane’s siren song; catching the eye of men she has no interest in, to watch as hopeful young girls mourn the loss of their crushes. What a vile, mentally amoral wench. 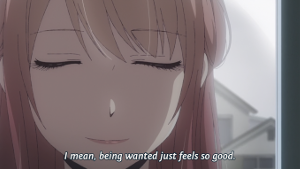 Akane reminds me of the cunning serpent that lures Adam to eat the forsaken fruit. If the names used for characters have any sort of symbolism in anime, then Akane is fitting for this unassuming antagonist. Akane, in Japanese, means “deep red,” a color associated with passion and lust. Other sources associate the name with “angry child,” an equally fitting description (in my opinion). 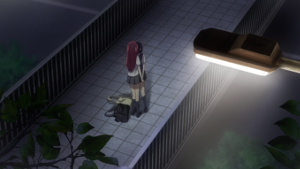 This episode also develops the relationship between Ecchan and Hanabi. Crossing into the territory of lovers, each for the own selfish reasons, the pair silently surmise the innocent friendship they once shared has been slated for a fond memory. Scum’s Wish continues to synergize physical and emotional desire in such a way that relies on the characters employing the former to substitute the latter. What viewers are witnessing now is the slow deterioration of a person en route to an isolated existence.

While Scum’s Wish is not meant for all audiences, the attributing characteristics surrounding the circumstances of these characters are universally applicable. Jealously, uncertainty, heartbreak, remorse. These are the feelings that influence, drive, inspire, and consume us.

Good
– Emotionally engaging and able to universally resonate with viewers.
– Depth of entire cast of characters is beginning to emerge, as this series spirals towards a fateful conclusion.

Bad
– Kanai’s motives, purpose, driving force has yet to be explored.  More depth to his character is needed for viewers to appreciate his worth fully.

Understanding that Akane’s naughty smile at the end of the last episode required some explanation, Scum’s Wish steps into her point of view for the first time to reveal just how sinister she really is. Her level of emotional detachment from her lovers is matched many times over by her pleasure from seeing the girls that love those men suffer. If my reaction to Akane from last week was any clue, you can guess that I found her completely vile after this episode. But does this make it a bad episode, or Akane a bad character? 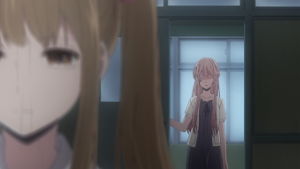 To be fair, it’s difficult for me to grasp her mindset, or that of any sadistic person for that matter. Deriving pleasure from causing others pain is something that I don’t understand very well, much less the desire for an adult woman to target a high school girl. In recognition of this show’s strong character work, however, it was able to explain Akane’s motivations clearly and without excessive buildup that might distract from the narrative at hand. While there is likely some unrevealed psychological issue that causes her to be this way, Akane’s nascent drive toward this behavior was a desire to never feel manipulated. To that end, she pulls all the strings herself and never surrenders her emotions to the men she targets or the girls that desire them.

Bizarre as she is, Akane makes a compelling foil for Hanabi. Hanabi desperately seeks a ‘pure’ love with Kanai. When she finds she can’t pursue him (thanks to Akane), she sullies that purity by faking a relationship with Mugi. Akane on the other hand has no delusion of purity in her relationships, and instead seeks the exact opposite; not to relieve the despair in her heart but to expressly create it in others. It’s a direct challenge to Hanabi’s very notion of love that has already begun to change her. In physically using, and being used by, Sanae to mutually relieve their pain, Hanabi is losing sense of the bond between love and intimacy. 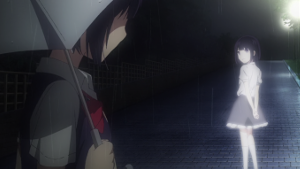 In this way, Scum’s Wish raises its dramatic tension without contriving a dramatic situation to do so. The way these characters change still feels organic despite their descent towards depravity, and their actions reflect what we know about them. Hanabi seeks out another to dull her pain, even after she tries to spare Mugi. Sanae relieves her own pain by deceiving herself into thinking that Hanabi’s refusal to deny her is the same as acceptance. A naive Kanai confesses his love for a woman he doesn’t understand in the least. It’s an emotional mess, but it’s so expertly crafted that it continues to demand attention.

On a side note: While I understand the point of Akane is to twist the notion of true love, the scene where Kanai first meets her boils my blood a little. Perhaps it’s the vibrant displays or the beautiful OST of this show that sometimes reminds me of Your lie in April, but the extra vivid coloration of the cherry blossoms in that first meeting hearkens back to the most fateful moment of YLIA, only this time there is no beauty in it.

Good
– Akane’s character construction is smart, even if the end result is disgusting
– Hanabi’s fall toward the ‘dark side’ raises many possibilities

Bad
– Despite all the ‘happy’ romances I watched last year this show might turn my heart back into coal.