“Home Visit! (And Homes Not Visited)”

While Kanna attends a play date at Riko’s house, Kobayashi and Tohru tag along to meet Georgie, Riko’s ‘maid.’ Naturally, Kobayashi and Georgie instantly bond over their maid obsession, leading to Torhu feeling left out. Later, the show focuses on Lucoa and Fafnir and how they are getting on in the human world. The question to be answered in this episode is: “who knows what you’ll summon when you cast a magic net?”

Dragon Maid has managed to procure a coveted spot in my “fully vested” category this week. It is largely due to my finally being able to appreciate this series for it’s episodic nature. Each episode essentially features two ten minute stories, separated by brief, adorable sketch scenes. What it lacks in dramatic moments, Dragon Maid makes up for with heartwarming, humorous material.

The big “aww” moment for this week was the otaku friendship that has formed between Fafnir and Makoto. Though the new roommates do not share they same adoration as Tohru and Kobayashi feel for one another, there is certainly a bro-mance forming. All in all, it appears the gamer addict Fafnir is adapting well to life in the human world. He has grown comfortable sharing a space with Makoto, where they game until the wee hours. With that said, most humans are not at all to his liking. Regarding all human creatures as either “hits” or “misses,” Fafnir concludes that it takes quite some time to determine which is which. The majority, he surmises, will end up falling in the latter category. At the very end of his arc, he is seen waiting outside in the rain for Makoto. When his otaku roommate approaches, Fafnir silently determines that Makoto is indeed a “hit.” *cue aww*

Tohru is subtly maturing with each passing week. When Kobayashi instantly bonds with Georgie, Riko’s maid obsessed sister, Tohru doesn’t launch into full blown, roaring jealousy. While there are glimpses of envy at the budding friendship, she ends up more concerned about proving her skills as a competent maid, then escaping when the pair’s full blown addiction becomes too much to handle. There is something to be said about this growth in Tohru though. I like to imagine that this has everything to do with Tohru realizing her own self worth. In the process of doing so, perhaps she is becoming more secure in her ‘relationship’ with Kobayashi.

There were two very disturbing scenes from this week’s episode. I avoided mentioning them because I am desperately trying not tarnish the positive opinion I have of Dragon Maid overall. I will only say this — sexual connotations surrounding children is unnecessary for any series, especially anime. Worse of all, these situations with Kanna, Riko, and Shouta are meant to add humor. The writers of Dragon Maid have already established their ability to produce comical, entertaining scenes without needed to resort to such reprehensible measures.

Good
– Torhu is maturing in subtle ways.
– Fafnir’s friendship with Makoto is the more heartwarming moment of the whole season.

Bad
– Sexual portrayal of children is wrong and should never be used to elicit humor.

After Fafnir finds a human ‘partner’ to take him in last week, Dragon Maid similarly looks at the other dragons and the humans that have become important to them. Those going through Kanna withdrawal after her adorable performance in episode four get their fix this week as she charms audiences and Riko during a home visit. Also, is it home visit week? Masamune featured one too.

Riko’s obsession with Kanna seems a little much for her age, as she gets aroused by physical contact with the young dragon and professes a desire to marry her. I found it quite cute how nervous she was about finding things to entertain Kanna with, but I can’t quite buy the romantic angle between these two. Similarly for Lucoa, her pairing seems a bit odd. As is my usual fear with her, the humor revolves around her ridiculous proportions and how unnerving they are to those around her. In this case, the young mage Shouta is quite perturbed and literally smothered at times by her overbearing form.

Her fascination with him in turn is like that of a doting caretaker rather than the passion that Tohru feels for Kobayashi or Riko feels for Kanna, but that doesn’t stop her from offering her body when she can’t seem to entice him with riches or power. To her credit though, she doesn’t seem to understand why her appearance might be troublesome. The whole thing is set up too quickly to make a great deal of sense, but then again so was Tohru’s introduction in the first episode. There might be something to this relationship later on, but considering that it’s Lucoa I’m not holding my breath. 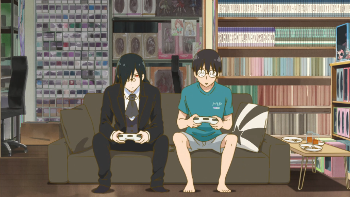 What picks this episode up for me is Fafnir and how he’s adapting to living with Takiya. They seem to understand each other implicitly and don’t clash in the same way that the other pairs do. To steal a quote from Remyfool (as it’s quite apt for this blog), Fafnir proves himself one hell of a dragon as he practices odd choreography for gaming events and washes dishes when he loses at games. What’s more, he seems to genuinely like Takiya despite his preference for humans he dislikes (so he can destroy them). It’s a rather sweet relationship that draws me in as much as Tohru and Kobayashi’s does.

Good
– Faf-kun!
– Seeing how the various dragons interaction with their human partners highlights their personalities perfectly.

Bad
– Lucoa’s behavior, though seemingly innocent, is basically corruption of a minor.