After Hanabi and Mugi decide to become a true couple, their admirers are less than receptive. Hanabi struggles with the precarious state of her friendship, as Ecchan refuses to give up the intimate relationship between them. When insecurities over Akane and Kanai’s relationship begin to consume her, Hanabi decides to seek revenge.

As  hollow feelings of emptiness engulf these love forsaken victims, the warm embrace of superficial emotion has become a viable, welcomed distraction. Not a solitary soul appears immune to the allure of comfort, however fleeting and disastrous the end shall be.

It is perplexing to witness an individual who recognizes a performance of false emotions unfolding, yet willingly adopts a role portraying someone who optimizes fulfillment. It is an unwritten truth that personified happiness serves only to obscure reality temporarily. The end result being a synthetic identity with any semblance of ones former self lost. This begs the question of how can someone veer so far from reality that they might never find themselves again? 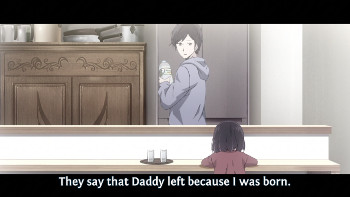 Abandoned by her father during youth, when crucial stages of development take place, Hanabi is led to believe that her presence was the poison that dissolved her parents marriage. Not only would these damaging thoughts shape her personality, but would also influence Hanabi’s perception of love. Hanabi refers to herself as an “emotional crutch,” for her mother. Think about that for a moment. An emotional crutch is something you rely on to support you through vulnerable stages in your life. For some, this is a short term necessity, like rebounding after an especially painful breakup. For others, this emotional dependence lasts a lifetime. Does this behavior from Hanabi’s mother mirror anyone else in this series?

As tragic as this seems, human beings are powered by emotions, not by reason. It is an instinctive reaction, both body and mind, to reduce the sensation of pain. This is the same response that leads the body to block pain signals immediately following a tragedy. When the mind is convinced you are safe, the excruciating side effects will set in. Similarly, this fictitious existence these characters have created is a barrier, erected to prohibit feeling pain. As these players grow comfortable in their respective roles, the mind will assure itself this feeling of happiness is genuine. The illusion will fade, plunging these characters head first into the aftermath that has resulted from attempting to deceive their pain.

Viewers of Scum’s Wish are witnessing a tragedy, helpless to rescue the victims and yet hypnotized by the events unfolding. It is said that all creatures have a bit of darkness buried deep within them, at risk of emerging if stimulated enough. This seems to be the case for Hanabi. The one person who made her feel complete, Kanai, is being crudely ripped away from her. Worse, the person committing this crime, Akane, places little value in that which Hanabi values the most. This motivates the darkness to emerge from such a shy, innocent girl. It is this same sort of darkness that has stirred our innate cravings as humans to silently witness this destruction unfold.

Good
– Realistic psychological reactions from the entire cast.
– Several animation techniques are incorporated to emphasize shifts in emotion and to maintain visual interest.

Bad
– This series is tragically beautiful. I have no criticism to add.

The heavier focus on Hanabi this week is not only welcome to get a better understanding of her feelings, but also aptly timed. With the other characters (minus Narumi) quite aware of Akane’s game and Hanabi’s relationship with Ecchan having reached a point of non-resistance, Scum’s Wish owed her an episode to both sort out what she’s going through as well as establish her direction going forward.

While there were plenty of signs as to what that direction would be, seeing it come to fruition is a saddening sight. The cynic in me wonders why these kids can’t simply focus on school. Why Hanabi is so hung up on Narumi that she can’t let him realize in his own time that he’s making a mistake and instead feeds Akane’s bullying. What allows me to still enjoy this was seeing how Hanabi’s choices are still quite natural – but born out of pain and fear rather than logic. For the first time, we see Hanabi decide to control what happens because she can’t stand the thought of someone else making her feel empty.

The other characters thus take a back seat as Hanabi dictates their involvement with her. She asks Mugi to date her for real – perhaps only to get him to forget Akane. She breaks things off with Ecchan (or tries to) to avoid getting her caught up in all this. She strings Akane’s ex, Takuya, along in an effort to hurt her. Strangely enough, Akane herself is completely left out aside from visions and flashbacks. These, however, show that the older woman’s influence is still dominating Hanabi’s thoughts, and will probably continue to do so until something else breaks her.

Spending a few minutes on Mugi near the end reminds us of the other tragic story yet to be told in this series. Noriko’s impassioned bid to reason with him is just another sign of her innocence, and her inability to understand the world that these other characters live in. Like the oblivious Narumi, she would be better off steering clear, but Mugi’s kindness may yet end up drowning her as well. Though he’s a consistent nice-guy when it comes to considering girls’ feelings, there’s no saying what he may resort to if Hanabi hurts him.

Good
– Hanabi steers this episode, delivering some of the best development we’ve had so far.
– Small visual changes really accent the story, with darker colors and depictions of mood replacing the vibrancy of earlier episodes

Bad
– No complaints this time. It was a really strong episode.