Arson Theft Control struggles to investigate Gohei Ishikawa, a member of a notorious clan led by Shinbei the Viper. Heizo recognizes him from his younger days as a troublesome child by the name of Otomatsu who suffered frequent abuse from his step-father. When Gohei witnesses Heizo’s idyllic home life, he is filled with a desire for the Onihei to understand his pain.

The separation between Onihei of Arson Theft Control and Hasegawa the family man has always been delineated in this series. Whereas the often brutal or dangerous aspects of Heizo’s life highlight his strength and cunning, scenes with his family show how warm and relaxed he is as a husband and father. The intersection of these worlds proves to be an interesting look at Heizo’s values, and how they impact the people around him.

As episodic as this series is, Heizo’s presence in the lives of most of the supporting characters we have met in this series seems brief. For people like Zenpachi and the servants they helped in last week’s episode, this intervention turns out for the better. What this episode reveals is that the momentary heroics of a well meaning individual don’t always create a lasting benefit to those they aim to help. In Otomatsu’s case strong arming his stepfather was a reckless decision on Heizo’s part as it made the situation that much worse in his absence.

Despite the brash tendencies of his youth, Heizo has matured tremendously to build the life and family he has today. His decision to take in his daughter Ojun reflects the kindness and sympathy for the downtrodden that we have seen all throughout this series from him. Ojun’s happiness is a product of the love her adoptive parents give her. Even when she’s punished, her response is petulant stubbornness rather than resentment, as Heizo is probably far more measured in his discipline than Otomatsu’s stepfather was in his.

Having lacked anything resembling that in his own life, the truth about Ojun’s parentage was too tempting a target for Gohei’s sociopathic tendencies. While the show could have opted for the dramatic in how Ojun handled the news that Heizo isn’t her real father, her simple desire to catch him another sweetfish to make up for perceived inferiority is a reminder of how much she values the life he has given her. In Ojun and Otomatsu, we see the vast difference between a Heizo that understands the full consequences of his actions and one that doesn’t.

The lessons he has learned through the years let Heizo approach Gohei with mercy and forgiveness where his own father had sought loathing and anger, but for Otomatsu it seemed too little too late. His choice to elect for execution rather than cooperation following his trial reminds us that not all good deeds go unpunished, but Hasegawa’s continued resolve to provide a good life for Ojun reflects his hope that he can pay forward his recompense for the many people that failed Otomatsu.

Good
– Contrast of the younger and older Heizo is illustrated well though his success and failure with Ojun and Otomatsu.
– The episode addresses mature issues, and doesn’t brush them aside with an overly happy ending.

Bad
– Some overly convenient situations drive the story. What kind of underling spills secrets about his boss’s family to a criminal?

After Ojun beans her mother in the face with a rubber ball before ruining Heizo’s prized sweetfish meal, she learns the true meaning as to why her father is referred to as Onihei – the demon. Seriously though, Hisae can take a wallop to the face and Heizo’s reaction is “calm down girls…” but when someone ruins his dinner, well that is taking things too far.

Heizo’s mild reaction and remorse over Ojun being upset with her punishment stands in stark comparison to flashbacks of another child, Otomatsu (ie: clay pot smashing boy). After being severely abused by his stepfather over the years, Otomatsu is seemingly rescued when Heizo intervenes. After Heizo moves on from Kamiya, the young boy’s village, the beatings not only continue, but intensify. Desperate, Otomatsu shows up at the Hasegawa household to plea for help from Heizo again. Mistaken for a vagrant, the child is turned away by the Hasegawa guards. Oblivious to the boy’s arrival, Heizo assumes the abuse has ceased. 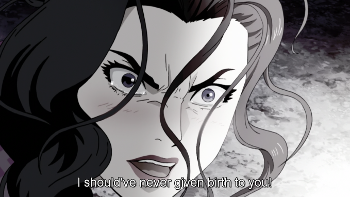 Desperate to end his suffering, Otomatsu fights back against his stepfather and subsequently kills him in the process. Instead of embracing the courageous little boy, Otomatsu’s mother banishes him from her home after cursing herself for giving birth to a murderer. These tragic events culminate into a life of crime, leading to Otomatsu’s arrest, and bringing viewers into the present day.

When Otomatsu is apprehended and brought before Heizo, it doesn’t take long for the abused child turned thief to detail the bitterness he has harbored for years. In his mind, Heizo betrayed him. Twenty years prior, the ronin samurai delivered a brutal beat down on Otomatsu’s stepfather. Afterwards, he swore that if the frightened boy ever needed aid again, he need only  call upon him. As I mentioned earlier, it didn’t end well for Otomatsu when he followed Heizo’s advice. 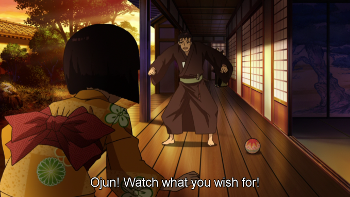 The primary focus of this episode shifts from Heizo’s reaction to physical confrontation to zero in on what adversely affects his emotional state. While glimpses of his tight knit family structure has been seen throughout the series, this episode highlights his family dynamic in a beautiful way. The harsh existence Otomatsu faced as a child is starkly juxtaposed with Ojun’s life with her adopted parents, Heizo and Hisae. Similarly it attests to how one becomes a product of their environment; as viewers witness how continuous neglect and rejection become the catalyst that spurs Otomatsu’s life of crime. All too often, this is the reality of a life seemingly without promise.

Remarkably, this episode doesn’t paint this dismal outcome in a positive light. In the end, Otomatsu makes the decision to die, rather than allow Heizo to care for him. Slated to become a forever reminder of someone Heizo simply wasn’t able to save; imparting that even the invincible protagonist, in the end, is still human.

Good
– Focus on emotionally developing Heizo on a far deeper level.
– Episode did not try to sugar coat the harsh reality that results from tragic circumstances.
– Another side of Heizo is seen; aside from the standard ‘invincible hero.’

Bad
– This episode was executed extremely well, no complaints!