Moca has her first date with Mugi even though she realizes he doesn’t share the same enthusiasm about it. She has dreamed of going out on a date with her ‘Prince’ for so long that she tries to convince herself that it’s the happiest day of her life, but the reality of the situation leads to an inner struggle to sort out her feelings.

As anticipated after last week, when Mugi agrees to a date, the spotlight shifts focus onto Moca this week in an effort to illuminate her personal attributes and motives. From the brief history given in prior episodes, it was understood that Moca’s feelings were a bit obsessive, but the emotional weight she tied to Mugi far exceeds the limits of a ‘healthy’ crush.

Moca exhibits all the signs of suffering from emotional dependency. This psychological attachment occurs when someone allows their feelings and emotions to be dictated by another person, even if that individual is not attempting to control them. In Moca’s case, she determines her happiness and worth based on the perception of others. In a few flashbacks, it is shown how the opinions of others formed a sort of idealized image of perfection around the childhood friends. The pressure to fulfill this improvised prophecy consumed Moca, leading to the obsessive tendencies she displays.

Such a behavioral condition negatively impacts self-esteem, since her significance is determined by cues from others. Based on these signals, Moca developed a ‘princess’ persona (coy, graceful, gentle); meant to replace her ‘true’ identity and satisfy the image of what others expect from her. Realizing this identity is an illusion, Moca likely believes she can manipulate the situation by impressing Mugi with this fantasy-like version of herself. 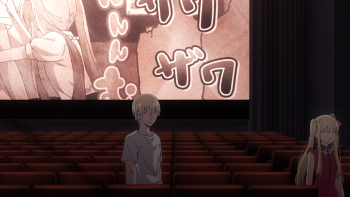 As the date draws to a close, Moca realizes that true love, which she yearns to share with Mugi, can not last when built on an uneven (one-sided) foundation. In a significant show of growth, Moca shatters any lingering hopes tethered to her infantile dreams of rendezvous with her Prince. It is the same emotional shift in maturity all humans face, moving past being in love with the idea of love by defining and experiencing true love.

I wasn’t sure how I would feel about an episode dedicated to Noriko, who had nicknamed herself “Moca” in reference to how cute she finds herself. My wariness came from the impression that she stood out. This wasn’t because of any outstanding facet of her character, but because everything associated with her didn’t fit thematically with the rest of the show. Cute dresses, obsession with princes and princesses, and reactions that felt more in line with a romantic comedy aren’t exactly what Scum’s Wish aims for.

Her flawed perception of Mugi and her desire to have him despite her awareness that she’s deluding herself, however, is very Scum’s Wish. Not far into her date with Mugi, Moca’s inner dialogue reveals she she understands her place in his life quite well. Her experience has always mirrored Hanabi’s in her pursuit of a ‘pure’ love, but various things in this episode draw the parallels more clearly.

Moca isn’t unwilling to compromise her emotions in order to have even a little of Mugi, nor is she above a little manipulation in order to get the things she wants. With a few scenes, she breaks away from the image of the idealized princess in her own mind and reveals herself to be as nuanced as the other characters around her.

Even if Moca isn’t as pure as she makes herself appear to be, her interactions with Mugi still feel different than what Hanabi shared with him or with Ecchan. This can be attributed to the fact that she really does want his love rather than just physical affection, but even as she resigns herself to the idea of being with him at any cost, it’s Mugi who finally caves during a near intimate moment. In a gesture that shows more maturity than might be expected of her, Moca comes to the realization that she doesn’t need the precious innocence of their fantasy life if it keeps Mugi from being able to commit.

Moca thus defies her childhood persona differently than Hanabi does. Whereas Hanabi rejects the sensibilities the vision of her innocent self counsels (as does Moca for a little while), Moca comes to understand that pursuing Mugi without having his love is unrealistic as well and thus puts herself on the path toward maturity rather than tragedy.

With Moca’s part in all this seemingly over as suddenly as it began, Hanabi seeks out Mugi once again when her plans to outdo Akane don’t proceed well. The implicit understanding they have with each other is apparent in the last scene as Hanabi’s newfound courage lets her suggest the one thing they’ve been unnecessarily putting off. It’s honestly one of the most hopeful moments this series has offered as they position themselves to actually confront the pain they’re going through, if only so they can move past it.

Good
– A surprisingly deep look at Moca that carried the same sorrowful tenor as the show’s other threads.
– Hanabi sees enough focus and cements her resolve without overshadowing Moca’s story.

Bad
– No complaints this week as the character work was good all around.