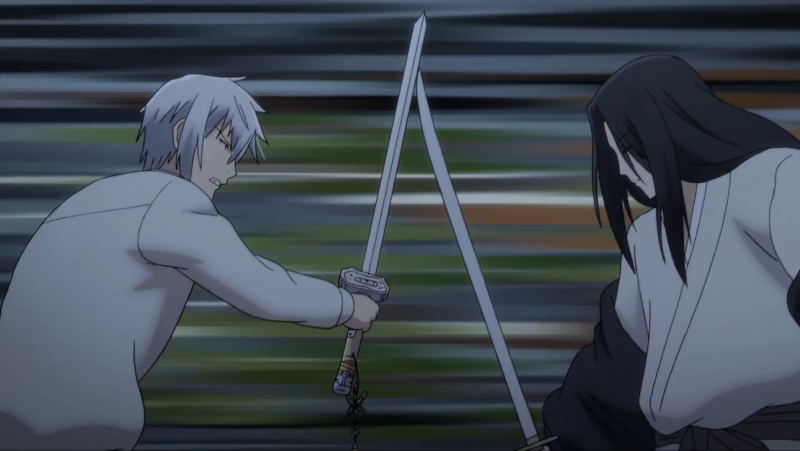 “Turbulence with a Chance of Dilemma”

After Keika awakens a power hidden within the Rakugetsu Sword, he begins taking on the form of his ancestor, You Nei. When it is clear that the tables have turned against him, In Tetsu retreats. After Ki regains consciousness, he seeks out his former Master to find out more about the Rakugetsu Sword. Meanwhile, the Shito family moves to interrupt Jiun’s plans.

Given that this has become one of Kimmie’s favorites this season, she’s always eager to try and piece together the information this show throws at us. She decided to  share some theorycrafting this week, so we’ll do something a little different for this post. I’m skipping my usual half of the episodic thoughts this time to let everyone who’s watching consider what Kimmie thinks this story is trying to do.

Although, this kind of deserves to be pointed out:

As always, I am approaching this episode with the same Sherlock Holmes mindset I have taken since the start of this series. This week’ review will be largely compromised of speculation, since this latest episode raised more questions than answers for me.

To summarize a few points, the Ragkugetsu sword was forged as a means not only to punish evil spirits, but youmeishi too. Because a youmeishi is mortal being, they run the risk of falling victim to temptation and evil, like all humans. If this happens (like in the case with Ragkugetsu), the consequences may be catastrophic. Therefore, the sword has the ability to seal the youmeishi powers, preventing them from reeking havoc on the world. So when Keika stabbed Ki with the Ragkugetsu sword in the prior episode, his powers were sealed off from use. 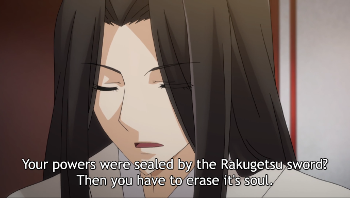 In order for Ki to regain his powers, according to Ki’s master (that is introduced in this episode), he has two choices. One option is to find the Rakugetsu sword’s scabbard, which no one is certain even exists. The second choice, Ki’s master explains, “If your powers were sealed by the Rakugetsu sword, then you have to erase its soul.”  What this means is up to interpretation, but I understood it as Ki must break his soul contract with Keika to regain his powers. By relinquishing the contract between them, Keika’s soul will no longer be able to exist in the earthly realm.

Speaking a moment of Ki’s master, not much is revealed about him. Despite his tardy arrival in the series, he is likely significant to the narrative. His purpose this episode was to clarify a few pressing details in an effort to fill in some plot holes. But given all the screen time he garnered, I can’t imagine the writers just tossing his character aside.

The master brings up the idea of equivalent exchange, demanding something of value from Ki as trade for answering his questions. If Fullmetal Alchemist taught viewers anything it is, “Humankind cannot gain anything without first giving something in return. To obtain, something of equal value must be lost.” Given Ki’s master is blind, he most likely exchanged his sight for something in turn. What exactly that was… I have no idea.

Once Keika passed away, the You bloodline ended. This resulted in what ever seal that had been intended to quell Rakugetsu’s evil intentions to be broken. With the seal shattered, the entities of Rakugetsu and You Nei (that dwell within the sword) have begun to leech out into the mortal world.

With the theme being maintaining balance between good versus evil, it is clear these abstract ideas have been manifested into Ki and Keika. With Ki represented using light features and Keika’s much darker, viewers are led to believe that Ki personifies good and the latter evil. But think about this, it is humans, youmeishi, that are vulnerable to corruption, not spirit shadows. Ki all but confirms this theory in this episode.

This leads into another assumption, what if Ki is fixated on keeping Keika alive because if he dies, than evil will likely consume Ki and destroy the world? In Tetsu revealed in the previous episode that if Ki dies, then so will his spirit shadow, however, if Keika’s soul passes on, then Ki will remain. The idea of Ki being completely taken with Keika is a romantic notion, but improbable. Ki is going to great lengths to keep his spirit shadow from harm, even though Keika’s passing doesn’t appear to pose a great risk.

If viewers imagine this series in the context of an actual soul contract, it makes more sense. This notion states that prior to birth, people exist in spirit form. During this time, the spirit carefully maps out the lessons it wishes to learn in life, to achieve spiritual growth. The life plan between the soul and what will become the physical person is called a soul contract. In order to make sure this soul contract is followed, people are assigned spirit guides. Essentially these guides are meant to watch over them and make certain they follow the path their soul has set for them.

If the goal of SpiritPact is to create a narrative around this ideology, then the underlying meaning of this anime becomes Keika taking on the role of a spirit guide, tasked with watching over Ki. Without spirit guides, a person is at greater risk of veering off their soul’s scripted path and allowing negative influences to impede growth. With this thought in mind, if Keika passes, Ki will be left without anyone to guide him towards a fulfilling life.

Good
– Slow reveals and a multi-layered plot make for an intriguing, thought provoking series.
– Magic boy transformations may become the new trend, I am all for it.

Bad
– With every question answered, even more questions begin emerging; unsure if all these threads can be tied together before the finale.
– Ritsu’s aggression against Ki is still a complete mystery and his sporadic appearance throughout the series has left his character far too underdeveloped.

One thought on “Spiritpact – episode 8”