Hanabi and Mugi make the fateful decision to confess to Narumi and Akane, just as they are beginning to understand how they feel about each other. Believing they have one another to rely upon when they inevitably fail, they go bravely to meet their fates.

As the long summer days begin to fade, the vow forged between Mugi and Hanabi still lingers– to confess their unrequited feelings for their respective sensei. In a rush of fleeting moments, the tragic lovers remove their masks of indifference that have served to keep their truths well concealed. While it is anticipated that divulging these innermost thoughts would initiate the healing process and draw Hanabi and Mugi closer together, unexpected consequences will likely shatter this fragile pair.

“The magic fades too fast
the scent of summer never lasts
the nights turn hollow and vast
but nothing remains…nothing lasts.”

Good
– Hanabi and Mugi’s secrets have been revealed; in a raw, beautiful way.
– As a series, timing and execution has been well thought out.

Bad
– Ecchan part at the beginning felt detached from the rest of the episode.

I should preface this review by saying that this was a good episode. Scum’s Wish does storytelling a lot better than most shows, but one could be forgiven for thinking otherwise after seeing the episode open with Ecchan’s segment. As out of step as it felt with the rest of the series, I’m not sure that the focus on her was even needed at this point. Viewers can only surmise that Atsuya becomes significant at some point (or is in the manga), but for now it’s challenging to care about him or his feelings about Ecchan at all. 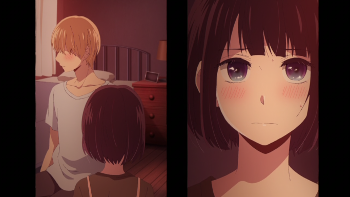 Fortunately the series goes right back into Hanabi and Mugi’s decision to tell their crushes how they feel, though they seem to be drawing the process out so that it takes up the rest of the episode. Doing so is understandable, given how dramatic the moment is supposed to be, but there is another factor at play here as well. Hanabi and Mugi no longer see each other as substitutes, and likely haven’t for some time now. At least part of their courage is coming from the fact that even when faced with rejection they have one another.

Anyone who has been watching this series could guess at how the confessions play out. The ‘experienced’ pair, Mugi and Akane, take on an almost hostile feel. Mugi seems resigned to the fact that Akane will never feel anything for him and calls her out on a number of her sordid actions. One wonders why he bothers with a confession in the first place, but I imagine he feels better getting this all off his chest. Akane doesn’t drop her act for even a moment though, and leads Mugi even further into her trap. Exactly what sort of naivety guides him into thinking he can change Akane is uncertain, but his willingness to give into her regardless likely goes further than a childish crush. 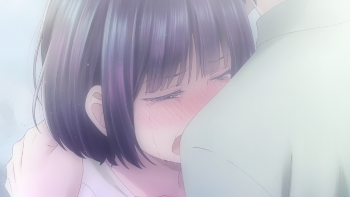 As upsetting as his decision is, Hanabi’s scene pulls at viewers’ emotions in a different direction. Like Akane’s answer, Narumi’s can be predicted from what we know about his character. Far more pure in his intentions and pragmatic in his approach, he has probably never seen Hanabi as anything more than someone to protect. While he doesn’t speak the words, Hanabi understands them clearly enough, and watching her say goodbye to her wish is heartbreaking. Even more so is the knowledge that she can’t turn to the one person she was expecting to be able to pick her up from this as Mugi is drawn into Akane’s game like so many other men before him.

Good
– Hanabi’s rejection is beautiful and sad, even when you know it’s coming.
– The drama moves once more towards Akane ruining things for Hanabi, who may take losing Mugi even harder than losing Narumi.

Bad
– I liked Ecchan’s hat, but why is she even here this week?