“The Path to Victory”

Awaiting news on the status of operation Shock & Awe, the Empire’s leadership eagerly anticipates the commencement of their large scale encirclement. As Tanya’s squad takes out the Republic HQ, Empire forces break open their right flank and begin a sweep to surround the Republic army. Elated from victory, Tanya’s squad deploys once more for what should be a mop up operation.

Though strategic discussions and pushing pieces around on a map can be a dull affair, seeing it play out can be an exciting experience even for an outside observer. The mass encirclement of an army is a dream for any military commander, and this episode of Tanya shows just why this can be such a devastating move.

Through some easily understood diagrams played during the Empire’s meeting with their heads of government, the triple phase plan they set out to accomplish when they stuck Tanya in a rocket last time unfolds. Even the most unversed in military operations can see why the Empire’s plan works (though being so simple helps), and showing the devastation and disarray among the Republic troops on the ground hits home and how big a move this is.

Tanya’s own involvement is small this time around as she coordinates the attack on the HQ since her ancillary squads end up finding the high value targets. It’s a nice move to show how capable the rest of Pixie battalion is without Tanya’s direct involvement, but at the same time was less exciting. It can be argued that the screen time was better spent on the ensuing operations, but all throughout this series we don’t get much of a chance to see the other mages in action. Even the more frequently seen ones like Viktoriya, Weiss, and Grantz fill small support roles that have very little engagement with the viewer.

In a series that’s been very light on character growth all around, the last minute or so of this episode offers a glimpse of Tanya’s postwar expectations. She acknowledges that war and fighting are terrible, going against her apparently sadistic behavior, but that normal life will restore the world once the war ends. Her dream seems to indicate that she plans to ‘beat’ Being X simply by creating peace out of the hell that she was dropped into.

Of course, the Allied Kingdom’s entrance into the war means that may be a long while off. With the cliffhanger showing Anson Sioux shooting Grantz out of the sky, a final battle with Tanya is set to ensue. For the first time in a while I feel rather excited to see the next episode, but ambivalent about what a finale might bring. The series has long since lost any semblance of focus, with respect to what the first few episodes hinted, and I can’t imagine what they hope to achieve beyond a rushed ending or setting up a sequel.

Good
– The episode returns to a military strategy focus without losing the audience’s interest through big wig planning meetings.
– An exciting cliffhanger, even if that’s all it is.

Bad
– No one has a compelling character arc anymore. Maybe they haven’t for a while. 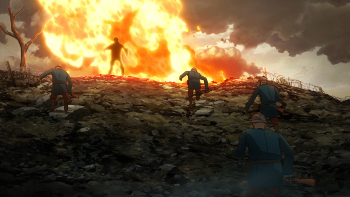 While war based anime are not usually my forte, I must admit that I am pretty intrigued to see where the plot is headed. It is rather surprising just how much Tanya has delved into combat when the first half of the season barely even touched upon the actual warfare. With the past handful of episodes delivering plenty of blood and battle, military enthusiasts (like weekendotaku) are probably fully invested at this point.

To quickly recap, Operation Shock and Awe was a success, as Tayna’s mage battalion obliterated the Republic’s headquarters. Sioux reemerged towards the very beginning and end of this episode; the latter involving direct conflict with Tanya. This is no doubt to psyche the audience up for the week ahead.

Everything appeared to be falling into place regarding the Empire’s war plan. So much so, Tanya even discussed having drinks after the latest mission is complete. In a rather shocking twist, Grantz is suddenly struck by a sniper and killed. With Grantz being one of the few whose character development has been given any weight, seeing his sudden demise was rather heartbreaking. Adding salt to the wound, there is an after credits scene involving Grantz, and Viktoriya. The prequel moment depicts a light-hearted scene where Tanya teases Grantz about not “perpetrating mischief” on Viktoriya as she slept. This absolutely struck me right in the feels!

All this aside, this week focused heavily on High Command dealing with battle strategies and Emperor representatives. All the technical war jargon made the episode feel a bit too slow for someone who isn’t a military aficionado. But the battle scenes still managed to garner my interest. I am eagerly anticipating the finale, if only to witness the showdown between Sioux and Tanya.  Also, isn’t there some sort of Being X involved in this series?  Is that still happening?

Good
– Well executed battle scenes and “military strategy for dummies,” through way of visual aids, used for people (like me) who are not military tech savvy.

Bad
– I would have been less affected if Tanya died. Why destroy one of the few characters that have been developed in this series?  For plot? Intrigue? Well…okay.

That’s a nice Panzer III, but it’s here about 10 years too early. The show hasn’t shown any tanks thus far, so I was surprised to see this as the first one featured. They had V1 rockets just last episode though, so this is a pretty minor offense. The British Mark I was the first tank, historically, but given their late entry into this series I guess it makes sense that the Empire got there first? That thing sucked anyway, so it’s nice to see the Panzer III. 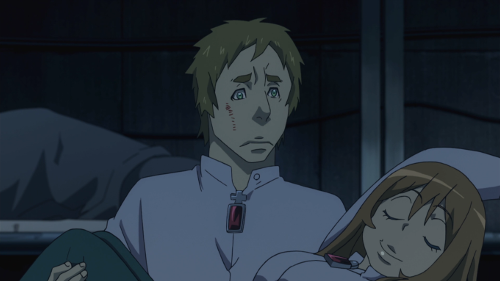 Whatever else can be said about this series’ storytelling, I do love these after credit scenes. The bit of lightheartedness helps in this episode, but you have to feel bad that poor Grantz didn’t even get a good night’s sleep before getting (maybe) killed.