With the cultural festival wrapping up, the group celebrates with a karaoke style after party. This leads to an all out sing off battle between the rival classmates to determine who truly reigns supreme. Will Aki discover who is her real prince charming and who is the villain?

Masamune offered up the most unsatisfying finale in the history of anime. Perhaps I am exaggerating, but not by much. Basically, the episode was a poor segue for either a season 2 or OVA – neither of which has been announced.

In the first half of the episode, as I anticipated, Makabe comes to the rescue by stepping into the role of Prince Charming to Aki’s Snow White. It was the second half that left a horrible impression. The beginning was mildly intriguing – a romantic play, Makabe saving Aki from embarrassment, a stage kiss that could easily become a meaningful gesture; a good foundation to end a rom-com with.

Instead, the series ends with this bizarre Karaoke style sing off between Makabe and Aki’s classes. Since the very last premise was about the two home rooms dueling for bragging rights, why is there a need to concoct another arc with practically the same setup? Any potential conflict between Gasou and Makabe is completely avoided, since Gasou is barely present in this episode. The anticipation of Aki discovering Makabe’s true identity is quashed as well; tiptoeing around the subject without even coming close to resolving it.

Given the inconsistencies with tone and screen time given to insignificant characters, I wasn’t anticipating a riveting finale to begin with. I would have been satisfied with Aki discovering Makabe’s identity and Gasou’s true intentions. As it stands, viewers are no closer to a resolution than they were during the premiere. If and when a season 2 or OVA appears for Masamune, I have no intention in wasting any more time on this contrived, disorganized mess of an anime.

Bad
– See above!  Honestly, no attempt was even made in resolving any of the dozen of loose threads left over from pointless arcs.

If I were to ask you to write a series finale, what would you include? Perhaps you would wrap up character arcs, answer lingering questions, or follow through with the initial goal that the series posed? The writers of Masamune might disagree though, as this episode seems to indicate they don’t find any of that to be necessary. 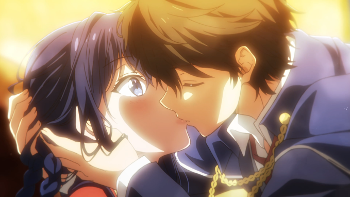 This episode feels so much like filler that it’s hard to imagine how anyone would decide to end a series with it. Aside from a kiss that was heavily built up but ultimately meant nothing to anyone, there was nothing of substance in this episode for the story or the characters. The most telling moment was when Yoshino saw how hurt Aki was after Masamune left, back when they were younger. There was always reason to suspect she knew what happened, but this episode finally confirms it.

The rushed conclusion of the Snow White play and the karaoke scene accomplished nothing of merit. At best the singing was done as a shout out to the OP and ED themes, and probably reproduced a manga scene. A halfway decent conclusion was already out of reach when they decided to bring in so many new characters at episode 10, but there was clearly no attempt to come close to one here.

The final scene isn’t quite sequel fodder, but apparently Masamune hopes to continue his scheme during their class trip to Paris. Maybe the show has planned for an OVA, but after seeing this I’ve probably had my fill of the story. The final shot refers back to the”dead or love” plan that he named back in one of the first episodes, but isn’t clear in its intent beyond that. It’s a completely squandered finale, and a disappointing end to a series that, despite its many clichés, once held a small glimmer of promise.

Good
– Sorry Masamune, you get nothing here.