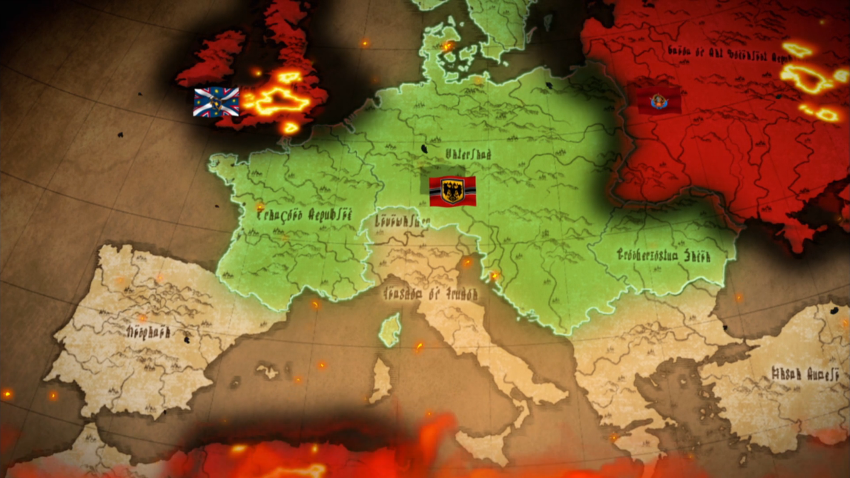 “How to Use a Victory”

Tanya explains to von Rerugen why the battles will eventually start up again. As foretold, combat erupts once more, sending Tanya and her battalion to the Southern Continent to fight against the Republic. While Tanya reasons that war is proof of God’s failure, Mary Sioux prepares to join the army and avenge her father’s death.

If the previous episode was a comprehensive display of the show’s offerings, the finale was a singular focus on just one of its facets. Unfortunately, it was one of the most boring elements the show has. With a lot of long winded exposition and no actual combat, the previous episode is much more appropriate for a finale than this weeks’ showing.

One of the major problems with this episode is that it doesn’t tell us a lot more than what has already been determined by the end of the previous one. The Republican forces are going to continue the war, against all logical expectations on the part of the Empire. What was nice about Tanya’s speech was that she explained why they would do this. War doesn’t operate on logic, and in the midst of war people’s emotions take over. She’s seen it happen firsthand, in this life and the last.

Still, the script elects to have everyone sitting around until the Empire decides to end the armistice on their own by sending troops after the fleeing Republican army instead of Tanya’s original plan to rocket dive into them. Viewers are thus denied the possibility of an exciting or dramatic finale that instead does nothing more than lay the groundwork for a sequel series or second season.

The small scene with Mary at the US Army recruitment office was surprising (though not for Kimmie), though the moment she’s seen there viewers can anticipate that she would be able to manifest some sort of magical ability. It was at that moment that her name hit me. The pronunciation of her surname, Sioux, is “Soo”. Mary Sioux. Mary Soo. Mary Sue.

In any case, Tanya is understandably fed up with trying to please God and instead promises to eviscerate him herself. I’m not sure what she expects after never learning true devotion (or the despair that may lead to it), but that’s where the series ends. I suppose though, for an episode that had no hope of resolving this story toward my expectations, this was a logical step.

Good
– I saw a Russian rail gun
– Tanya calmly learns the lesson that order and conformity towards an ideal have no place in a war.

Bad
– This episode cements the fact that this series didn’t actually achieve anything other than watching an alt-history play out.

Yet another finale leaving threads dangling in the hopes of a second season… grr! To be fair, I wasn’t certain what to expect. Knowing that the narrative couldn’t possibly wrap everything up in the end, I guess the most I was anticipating was a half-hearted attempt at a inconceivable resolution. 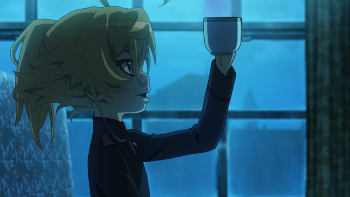 Another surprising choice for the finale was the lack of action laden scenes. With the second half of the series basically fueling itself with combat sequences, I assumed (wrongly) that the big ending would be more of the same. Instead, the episode was basically a summation of Tanya’s views on war and the events that have taken place during it.

Extending upon the last episode, exactly what Tanya explained would happen did. The Empire celebrated a victory prematurely, the Republic ‘withdrew’ from the capital, and has since aligned itself with other nations. Shocking? Not in the least. For what it’s worth, I found the superiors becoming upset over being bamboozled absolutely rewarding. Maybe next time they will listen to the pint size officer who has been nothing but an asset this entire war.

Earlier in the season, I surmised that Anson’s daughter, Mary, would eventually join the fight (and avenge her father’s death).  My reasoning for this had to do with Anson’s determination to keep his daughter from “ending up in Tanya’s position.” Because it was touched upon often a few episodes back, I assumed it was something the audience was suppose to latch onto.

Towards the end  of the finale, Mary makes a passionate speech that highlights her love for God and through God, she will seek to protect others. In a rather straightforward foil, the last scene of the series depicts Tanya also referencing God, specially how she is going to cut Him down. Interesting.

If there is a second season slated for Tanya the Evil, this opposing duo will inevitably be meeting on the battlefield to hash it out. Will I be tuning in? It’s possible. Will WeekendOtaku and I be reviewing it, eh perhaps. Perhaps I will also eat a jar of nails.

Good
– It’s over. Well, it isn’ OVER, but it was a chore to review this series each week.
– The finale was still better than Masamune.

Bad
– I don’t have that kind of time to list all that was wrong with this series.
– A short list includes: shoddy animation, over-saturation of one main character with hardly any focus on supporting characters, disappearing antagonist, inconsistent tone of overall series….

Does anyone read these? 😛

The title “How to Use a Victory” and Tanya’s use of it in this is another reference to the Carthaginian general Hannibal Barca. In destroying the Republican forces after the large scale encirclement last episode, the Empire was in a very similar position to Hannibal after he did the same thing in the Battle of Cannae during the Second Punic War.

His cavalry commander, Maharbal, was eager to march on Rome following the battle, but Hannibal denied the attack, stating that he needed time to weigh the plan. Maharbal’s bitter retort translates to “no one man has been blessed with all God’s gifts. You, Hannibal, know how to gain a victory; you do not know how to use it.” Hannibal would go on to fail in his attempt to crush the last of the Roman resistance and was worn down after more than 10 years of fighting in Italy.

In the Empire’s case, they did indeed advance on the Republican capital of Parisee, but the analogy refers to their army, still operational and escaping the Empire’s grasp. They might not know how WWII turned out, having never experienced it, but they really should have learned something from Hannibal.