“Emperor of Demise Arrives! (It Was the Final Episode Before We Knew It)”

The cloudy day begins like any other but Tohru’s sense of doubt begins to plague her with regards to spending her life with Kobayashi. Before she realizes it, her father appears to take her back to their world and Kobayashi struggles with the idea of Tohru never coming back.

As the title so thoughtfully points out, the finale was here before viewers ever realized it. In the beginning, I was not impressed by the attempt to maintain a semi-serious plot, while over saturating each episode with humor. With that said, I warmed up to the idea sometime after the introduction of the other reoccurring characters (Kanna, Fafnir, Lucoa). Though the severity of Tohru’s situation never fully resonated with me, I appreciate the intended message of having the strength to defend that which you hold most dear.

Also worth acknowledging is the consistent tone that was maintained throughout the series. When Tohru is whisked off to her homeland, one might have anticipated an impetuous, feverish response from Kobayashi. Befitting her reserved nature, however, Kobayashi doesn’t verbalize her remorse. Instead, her emotions are exhibited through slight changes. Her frequent glances towards the door, the bumbling attempts to provide warm meals for Kanna, and the slovenly state of her apartment strewn with clothing.

While I had no real expectations for the finale, the ending far met anything I might have considered. I would have been content enough with another familiar “feel good” episode, sprinkled with humor, and a underlying hint of sentiment. The pleasure of witnessing Kobayashi stand up against Tohru’s fearsome father; then ask to introduce her little family (Kanna and Tohru) to her parents wrapped the entire series up nicely.

Although Dragon Maid could end with the one series, I hope this isn’t the last we see of these beloved characters. In these short few months, they managed to work their way into my heart, so much so, that I will miss ‘visiting’ them each week.

Good
– The tone of the series, and that of the characters, is maintained throughout the series.
– The adoration Kobayashi feels for her new family is subtle until the end, but makes it all the more endearing when the audience notices her emotional shifts.

Bad
– It’s over! My Wednesday nights will be spent weeping until another heartwarming series can fill this void — or I will just re-watch?

With the teaser sequence at the end of the last episode, Miss Kobayashi’s Maid Dragon was almost certain to have a dramatic finale. I worried at first that the addition of Tohru’s father, a being who has been consistently depicted as a terrifying individual would become such a disruption to the show’s otherwise remarkable exploration of situations that come up in life. This did end up happening to a point, but Maid Dragon proved its ability to stay true to its message.

This series has consistently portrayed itself as a slice of life comedy, but this episode runs very sparse on anything that might garner laughter in order to emphasize the more serious tone. Beginning with the reminder that Kobayashi’s lifespan is far shorter than her’s, Tohru’s semi-willing abduction by her father leaves her family frazzled without her. For all my worries about losing the slice of life vibe, this episode dives right back into it in a way that it has never done before. 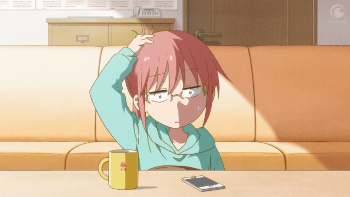 Kobayashi’s reaction is almost typical for her character. She doesn’t display any signs of breaking down emotionally, but does visibly struggle to pick up everything that Tohru had been taking care of. Small changes, like take out containers replacing dishes, overly simple meals, and Kanna falling asleep before Kobayashi gets home reflect an absent homemaker. The home simply lacks warmth, even with the kotatsu still present in the living room.

Her eventual return was expected, but even the fantastic confrontation between the dragons echoed the discontent that can arise within a family. Tohru’s father is like any other that disapproves of his daugther’s lifestyle choices. His worldview doesn’t include the possibility of Tohru being with Kobayashi, and despite his violent disposition he doesn’t act in a way that could be considered malicious. His love for his daughter is apparent, even at the height of their confrontation.

It’s for this reason that he is finally swayed by Kobayashi’s fearless resistance when he tries to force Tohru to return a second time. Just as she did with the other dragons, Kobayashi’s candid desire to make Tohru happy strikes a nerve and convinces her father to make his departure, content in the belief that his foolish daughter will one day see the error of her ways.

This ending featured little involvement from the other dragons, with even Kanna meekly hiding most of the time Tohru’s father is present while ‘mom’ faced a scary situation, but it seems only fitting for it to be this way. Beneath the jokes and the dragons’ mishaps while trying to adjust to human life, Dragon Maid has always been about Kobayashi’s little family and the series maintained this focus through the very end.