200 Word Anime resumes as The Ancient Magus’ Bride continues with Chise returning to her studies under Elias’ care. Read on to see what Karandi and I thought of the episode and catch up on any posts you might have missed from the winter season here.

This episode eases back into the story after a one week break with a bit of recap and a lot more of the idyllic magical scenes that we’ve grown used to with this show. Aside from a new OP and ED theme though, the second cour’s introduction didn’t provide much in the way of anything new. While it’s typical for these “halfway” episodes to work out this way, fans who were excited to continue the story may be left feeling less than impressed.

To be fair, this episode wasn’t far removed from the show’s usual style. It had a bit of danger thrown toward Chise in the way of the aberrant wooly bug which served effectively enough to create a few touching moments between her and Elias. Chise’s strong desire to keep a scary memory of him was a nice way to reaffirm her conviction in actively choosing her life as it was now, and Elias’ slow understanding of loneliness hearkened back to Lindel’s description of him as a child. Seeing Elias name her as his “human teacher” brings us full circle to what we saw in the OAV, and continues this show’s trend of slowly tying in previous threads. 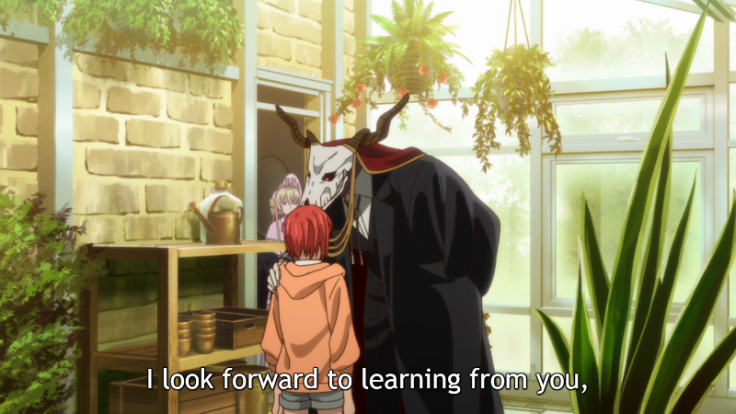 The more irritating trend that the show can’t seem to remedy is tacking on a cliffhanger at the end. I understand the need for it since the episode was otherwise had little movement, but we saw too little of Ashen Eye to really feel anything about him at this point. Conversely, the added backstory on Chise’s parents does intrigue me and I’m sure we’ll see more built on it in the coming episodes.

I’m hopelessly hooked on this show regardless, but I will be looking for next week’s episode to flesh out a little more about the plot’s direction.

As an individual episode this one was kind of ordinary yet as Weekend has noted it connects nicely to past plot points and presents future possibilities. Still I must admit that midway through this episode I ended up feeling more than a little bit detached so by the time we got to the cliffhanger ending I was jaded enough to simply think, ‘oh, Chise’s in trouble again’.

Though this seems to be an ongoing issue that this show has when a character says something cryptic and about a minute later Chise steps right into whatever it was that they were apparently warning her about but in as non-specific a way as possible. It is probably time for characters to just say what they mean given if you know there is a heat seeking flying sheep around, maybe you should just tell that to your apprentice. The new OP also doesn’t do much for me. While the first OP was distinctive enough that just its opening notes were enough to get me back into the headspace of this show, this opening is decidedly average. Again, not bad in any way, just lacking a little.

While it might sound like I’m being a little critical, overall I still really like this show, but after waiting two weeks this episode just didn’t feel like it did enough to warrant the wait. It works as a mid-season episode but not much else.

That’s all we had this week, but what did you think? Are you excited about the rest of the series or is it starting to lose some of its charm? Let us know in the comments and be sure to check out Karandi’s blog for more reviews and other great content.