While I’ve mostly enjoyed Darling in the FranXX through the first half of the season, a recent change has irritated me much more than it should.

Darling in the FranXX is a bit of an oddity because it’s not, on paper, the kind of show I would expect to enjoy. I love a good dystopian mecha series as much as the next person, and the combination of Trigger and A-1 Pictures animation talent practically guarantees a good visual experience. But it’s the blatantly voyeuristic aspect that runs rampant through its presentation that makes me cringe a bit. Call me a prude if you want, but I’ve never enjoyed anime that leans so heavily on crude, base stimulation in order to draw in or keep an audience. I challenge you to tell me there was any other reason to design the FranXX cockpit that way.

Still, I somehow kept going after episode 2 where the show looked like it was turning out to be one big sex joke. I found that, underneath the lewd sheen, there is an interesting story, decent world building, and a few honestly engaging characters. The first half of the season had me quite hooked actually, but a recent change has led to a sudden shift in my feelings.

No, it’s not the drop in drama and quality of klaxosaur combat scenes.

nor that the Hiro x Ichigo ship isn’t going well;

nor the reduced frequency of butt shots;

No, my high brow reason for displeasure is because they changed the ED.

Yes, I know I’m three weeks behind complaining about this. Give me a break!

It’s hard for me to accurately define the type of music I like, mostly because of my great lack of knowledge about musical theory, but I found Torikago to be an amazing song. The soft piano before the end credits, the great tonality of the melody, strong string instrumentals, and beautiful vocals just all come together for me to be one of best EDs I’ve heard recently. If you’ve not seen this show or are the type that normally skips the ending, have a listen here (full song):

I don’t understand why they felt the need to split a 12 episode season into multiple EDs in any case. Even Soul Eater gave each one of theirs a full TV season, and they had four of them. I will submit that Torikago (literally, “bird cage”) works better for the “taking flight” theme of the first half of the season. It makes some sense that they phased it out since that story has transitioned into something else lately, but I think that co-dependent partnership between Zero Two and Hiro is still a prominent enough that it could have been used throughout.

Its replacement, Beautiful World, is not a bad piece itself. It’s just a lot slower, less energetic, and more simple in its composition. Also this anime has drawn so much from Evangelion already, the fact that they lifted the title of another song I love is a bit unfortunate. But really, the chief problem for me is that it’s not Torikago, and for that I can’t forgive it. I haven’t been this disheartened since they replaced Los! Los! Los! in The Saga of Tanya the Evil, and that was only for one episode!

To be fair, I don’t blame the studio, or any production, for wanting to get the most out of its cast. Many anime use their VAs for the OP/ED, and when you have Haruka Tomatsu and Saori Hayami, you can’t go wrong with having them work on the music as well. They actually use XX:me (A group created for VAs of the five girls, essentially) for a third song, thus far only played at the end of episode 7. I do love the voice talent on this show, so that’s a small silver lining. I just miss Torikago and I’m bitter. 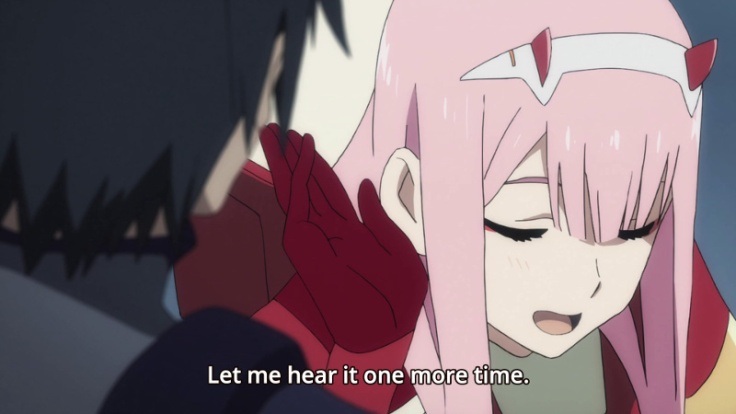 How do you feel about the ED change? Have you ever had an OP or ED you enjoyed get replaced mid season? Am I the only one that gets worked up about this?

Let me know your thoughts in the comments, and as always thanks for reading.

9 thoughts on “My Recent Problem with “Darling in the FranXX””