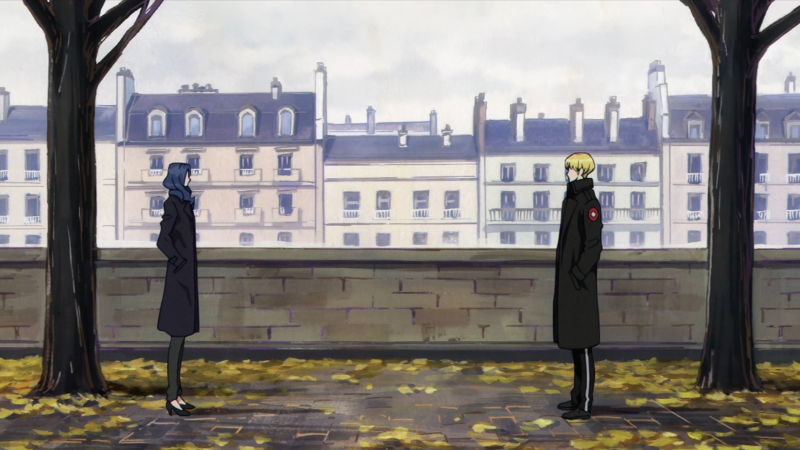 A recent article from syfy.com attempts to highlight a tendency for anime to idealize fascism, but ultimately proves itself an example of Western viewpoints getting in the way of reasonable critique of anime.

It is undeniable that anime has worldwide reach and appeal today. Nearly every country with an established media industry can offer its residents access to a wide variety of anime, not to mention the numerous international broadcasting and marketing services that expose these Japanese creations to a far reaching audience. This has led to an explosive growth of anime fandom, but is a double edged sword in many ways as well. Greater exposure means greater diversity in the values and opinions of viewership, and a greater chance that something will be taken the wrong way.

Before I get too far into this post, I should define some of the terms and clarify my intent:

“Western” refers to pretty much everything outside of Japan, but specifically societies that have a strong leaning against cultures which espouse non-democratic ideals or discourage “modern” social norms. The “Western” culture I’m most familiar with is that of the Unites States (because I live there), so that is the perspective I’ll mostly discuss.

The use of the word “trouble” in my title is pure hyperbole and meant to poke fun at the article I mentioned in the intro. At most the topic of this post is a personal annoyance of mine, but it may have some real significance to the way people watch and think about anime. The level of “troubling” is entirely up to your interpretation.

With that out of the way, the reason I’m writing about this is because of an article I read on syfy.com titled “The troubling relationship between anime and fascism”. The article’s author (Michelle Villanueva) prefaces it by recalling her experience in trying out ACCA: 13-Territory Inspection Dept., the slow burning political intrigue/conspiracy anime from Madhouse in Winter 2017 based on Natsume Ono’s manga of the same name. She explains that she couldn’t finish it, citing the reason as the style of the uniform Jean and the other inspectors wear.

This seemingly superficial reason has a little more depth to it than that, but only a little.  Villanueva explains the similarity between the Inspection Dept. uniforms and that of SS officers in Nazi Germany offended her to the point of dropping the series. She ponders why she felt this way for a couple of brief sentences, and if the reaction is normal. But then she goes on to posit that Nazi themes and/or imagery are all over the place in anime, and spends the rest of her article detailing various examples. These turn out to even more superficial, as does her examination of artistic intent and audience values as it relates to anime.

Before I go on, it should be understood that I don’t really care if Villanueva dislikes ACCA or any other anime, nor am I judging whatever reason leads her to come to that decision. What I have a problem with is the knee-jerk tendency to impart personal ideology and cultural beliefs on a work that wasn’t created for a Western audience in the first place. My issue is based around the idea that this kind of sentiment  leads to unfair critique of anime, both as a storytelling medium and a product of a different culture.

To start with the uniforms, Villanueva is simply seeing what she wants to see. Her description reads: “black outfit: stylish and sharp with a hint of red near the shoulders — and echoing an SS uniform.” Forget for a moment that black military uniforms are not uncommon even in democracy loving USA and Britain, and that the splash of red on the arm is the badge of their office rather than a symbol of political ideology. Seen a certain way, the uniform could resemble that of a Nazi SS officer, and depending on one’s sensitivity to this, it might indeed be a breaking point.

But a number of other titles also find their way into her article as a basis for her points, and the intent becomes questionable. For example, she cites Attack on Titan, Fullmetal Alchemist, and Mobile Suit Gundam, as shows depicting either WWII Germany equivalents or fascist powers. Similarly the main characters in Girls und Panzer drive a tank that “used to trundle across the fields of Europe vanquishing everything in their paths.” Villanueva even argues that Food Wars‘ has fascist themes in the elite chefs that cling to traditional techniques and stifle innovation, stretching both the definition of fascism and the validity of her arguments past their limits. Because while it can’t be denied that the themes are there, the reason for them is either left out or misunderstood.

What Villanueva ignores is the thematic value these elements bring to the story. A totalitarian setting is often the perfect starting point for a determined underdog protagonist to uncover what’s wrong with the world and fight to change it. If they’re fighting against a democratically elected government or free society, doesn’t that make them a bad guy? Or since hyperbole is the theme of the day, a terrorist? Having bad guys for good guys to fight isn’t exactly a novel concept and I don’t know why she’s surprised that a regime that most of the world fought against in the 1950s (anime’s nascent period) is used as a model. With regards to Food Wars, almost every show that features a creative genius has them fighting against some manner of traditionalism. Also, the Panzer IV is an awesome tank. Who wouldn’t want to operate it? Even most western fans of history can think WWII German tanks are cool while decrying Nazism.

Indeed, Villanueva herself invalidates whatever point she’s reaching for by explaining that the protagonists in these shows fight against the fascists (or simple traditionalists) that oppose them. Unfortunately she backpedals immediately after with an entirely different point about problems arising when people glorify or cosplay as “evil characters,” hearkening back to her reason for dropping ACCA – She doesn’t want to see people cosplaying as the Inspectors.

The thing is, if her issue with the uniform was just her personal observation and reaction, she could have just decided it wasn’t for her and moved on. Instead Villanueva searches for implied intent, applying pure conjecture on the mangaka’s thought process on the uniform design, and dubious conclusions based on Japan’s history as a former imperialist nation, to suggest that Fascism is a prevalent aspect of their fiction. She writes as if Natsume Ono had even considered her Western viewpoint when drawing ACCA, and that cosplayers who like her characters are idolizing Nazism somehow.

I won’t dive into a discussion about Japan’s imperialist period (hard though it is for me to resist being baited into historical exposition), or a political diatribe on nationalist trends in various countries, but to me this article seems more inspired by Villaneuva’s personal experience than an objective study of anime. A number of points allude to her feelings on the alt-right, including a paragraph on how many of them use moe girls as online avatars. I’ll have to take her word for it since I tend to avoid both moe otaku and the alt-right alike. I guess some alt-righters like anime too, but her “analysis” of why they like these characters, and its relation to ideals purportedly pushed by Japanese society, is simply more conjecture. It’s a conclusion formed out of disdain and personal conviction rather than any actual research.

A line that Villanueva uses near the end summarizes the spirit of her article and my problem with it:

“It only seemed as if the manga creator just liked the aesthetic, and perhaps, like in those memes, there’s a fun sense of irony in the dissonance between sympathetic characters and SS-esque uniforms. But irony, in this current political climate, is dead.”

It might be dead in the United States. It might be dead just to her. I’m fairly sure she has no idea if it’s dead in Japan, assuming that political irony is even intended in Ono’s character designs. Villanueva’s feelings on the alt-right may be valid, but her article is at best a projection of those feelings on an undeserving target, and at worst a soapbox for her agenda with a clickbait title. People have every right to dislike what they want, but it becomes problematic when one adopts a “you should know better” stance against a work or author while working with very incomplete knowledge themselves.

Is Japan largely a homogeneous and socially conservative nation? Sure, but it’s a different place, full of different people, who think about things differently than Westerners. It’s arrogant to claim that you understand the society without living in it, and plainly ignorant to claim that it idealizes fascism based on your own Western values. And besides, whatever Japan’s conservative leanings are, authors and artists push social boundaries all the time. The handful of anime non-examples that Villanueva provides doesn’t (by her own admission) show a trend toward fascist ideology, and five minutes of actually watching ACCA should dispel the notion that Jean Otus or the other characters show any similarity to the Nazi SS.

But even if they did, I wouldn’t consider it an inherent problem. That may be an unpopular opinion, but I think it’s arrogant to expect that everything will live up to your personal philosophy. Fiction exists as a way to explore ideas without being constrained by reality or the fickle social atmosphere of the time period. To suggest that Natsume Ono can’t use a black uniform design because it could resemble a Nazi-esque image, or that a writer can’t create a story about straight up Nazis for that matter, is just as much an enforced regimentation of thought as the “fascists” Villanueva warns about.

I mean… what would she have said if she tried to watch The Saga of Tanya the Evil instead?

Artists should have freedom of expression to tell their stories, and viewers should apply their own values when choosing what to consume, but those who critique their works have more responsibility. It can be very damaging when a site like syfy.com suggests that anime has a fascist bent. Unlike anime, articles on that site are written for a Western audience in which many of its readers might not have extensive knowledge of anime and its norms (let’s be real; it’s syfy, not ANN).

Villanueva writes many articles about anime on syfy, most of which aim to enlighten readers about lesser known anime. She helps expose anime to a greater audience, and this is generally a good thing. There is only cause for concern when she uses her platform to hold personal opinion above research and reasonable supposition, and implores her readership to call out anime when it doesn’t conform to their ideals. Especially when anime is the product of a distinct society and yet still shaped by widely diverse influences.

If you read Villanueva’s article, what did you think? Do the uniforms strongly suggest a Nazi image, implied or otherwise? Are fascist elements prevalent in anime, and if so, are they glorified?

Should anime bend to Western ideals? Or is there something in the cultural background of its creators that makes it special?

Should writers/bloggers simply express their opinions, or is there a need for them to credibly back up their claims?

I clearly have opinions on these questions, but I would like to know yours.

20 thoughts on “The Troubling Relationship Between Anime and Western Viewers”