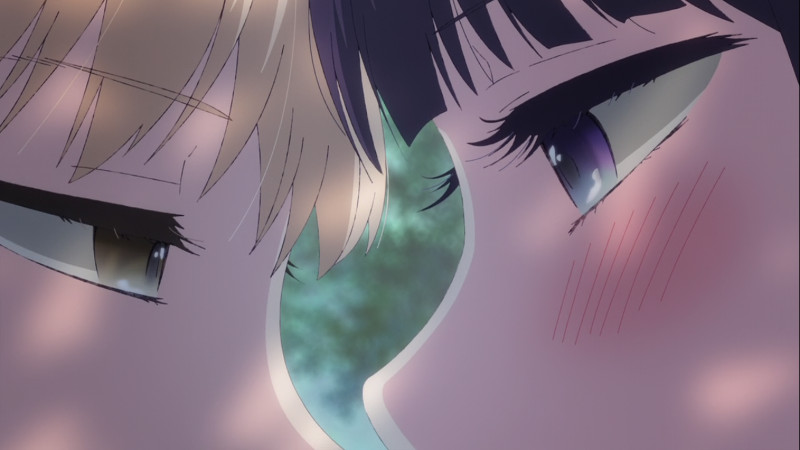 Seventeen-year-old Mugi Awaya and Hanabi Yasuraoka appear to be the ideal couple. They are both pretty popular, and they seem to suit each other well. However, outsiders don’t know of the secret they share. Both Mugi and Hanabi have hopeless crushes on someone else, and they are only dating each other to soothe their loneliness. Mugi is in love with Akane Minagawa, a young teacher who used to be his home tutor. Hanabi is also in love with a teacher, a young man who has been a family friend since she was little. In each other, they find a place where they can grieve for the ones they cannot have, and they share physical intimacy driven by loneliness. Will things stay like this for them forever?

I love when the premiere episode in a series is so engaging that you are left anticipating the rest of the story.  Scum’s Wish did just that for me. This is a series that isn’t averse to exploring the sexual relationship between teenagers without the inclusion of romantic attachment.

The episode unfolds through Hanabi’s, the main female protagonist’s, perspective. Left with an unrequited love for her older friend turned homeroom teacher, she is the first to share her feelings with Mugi; a boy at school. As she comes to learn, Mugi also harbors adoration for another teacher. He proposes an arranged relationship with Hanabi – to maintain the appearance of a couple; and suppress their unobtainable feelings for their senseis through physical contact with each other.

These main characters are presented as complex and conflicted; truly capturing the emotions that crop up when traversing the cusp of young adulthood. Hana is reserved and insecure, withdrawing into the security of an invisible bubble to protect herself from the rest of society. Mugi is assertive, yet sympathetic towards Hana, patiently nudging her out of her comfort zone. These are confused adolescents dealing with the pain of heartache in the best way they know how. What will prevail is a story of growth and maturity gained through experience, failure, and conquering subconscious limitations born out of uncertainty.

Honestly, how fundamentally humanistic is this plot? Between the remarkable story execution and visually stunning scenes, I am completely enthralled by this series.

Bad
– At this point, I have no criticism with the series.

After several less than excellent titles this week, finding one that really stood out from the rest was turning out to be a slim prospect. A single episode of Scum’s Wish changed that and gave me hope for at least one series to be truly engaging this season.

There are a few elements that allow this anime to do so. As a seinen drama, it explores some mature content and handles it in a serious way. Unrequited love is often the topic of romantic comedy and is played for any number of embarrassing or hilarious scenarios that  you might see in something like Toradora!. There are, however, no laughs to be had with Scum’s Wish. The main characters want people that are socially unacceptable for them to pursue, yet can’t put aside their feelings. Desperately seeking an outlet for their angst, they decide to use one another.

The decision isn’t made ironically or without hesitation, but out of a hopeless sense of the inevitable. Worse still, they know they’re fooling themselves into thinking it’s enough, yet going through with it because they crave relief for their crushing loneliness. The series doesn’t hold back from the physical aspects of a relationship either, as fake as the one between Hana and Mugi is, letting viewers know that it won’t be coy about its content.

If the compelling story wasn’t enough, the series has some really stunning animation and character designs as well. The visual style appears to pay homage to the source material by sometimes placing what look like manga panels within a scene. These carefully placed frames help tell the story as expressively as Hana’s narration, capturing a moment while the rest of the display unfolds. It’s a style I haven’t seen in anime before, but works well here to convey the artistry and care that went into creating each scene. If this sort of quality keeps up, I may keep watching just to examine the artistic expression. Let’s not sell this episode short, though. Almost everything about it was top notch.