Tohru plays the lottery at the Shopping District and comes away with a kotatsu that sees her family lazing under it through the final days of the year. Later, Kanna is invited by Saikawa to share in their first shrine visit and Tohru hosts everyone for a New Year’s party.

Continuing the holiday festivities, this episode focused on Kobayashi and her clan of dragons ringing in the new year. After the premiere episode of DragonMaid, I assumed the shows’ humor would focus around Tohru and her adoration for Kobayashi. Instead, the direction has shifted, with most of the comedic moments involving how dragon’s perceptions and functions are vastly different from humans. This idea is highlighted this week when Tohru throws herself into participating in all the traditional New Year’s activities, including making mochi from scratch and sending out cards.

While winning the kotatsu provided a foundation for the episode, it is a metaphor for something far deeper. Similar to the makeshift family Tohru has created, the kotatsu provides warmth, a blanket to wrap oneself in after an especially difficult day. The kotatsu has become such security for the trio, that the thought of leaving its comfort, even to attend to daily tasks, is less than appealing. When Kobayashi asks Tohru about her parents, and returning to visit them, the dragon maid explains that she is with her family now. Just like the warmth of the kotatsu, the thought of leaving Kobayashi, even temporarily, is difficult.

All in all, this was another heartwarming episode. I am looking forward to a fuzzy, feel-good finale next week!

Good
–  Humor has shifted from being about just Tohru and Kobayashi to involving the mechanics of dragons adapting to the human world.
– The kotatsu being about warmth and bringing family together was an obvious metaphor and fitting choice for this episode.

Bad
– Nothing to see here… move on reader!

The tone of this week’s episode felt as relaxed as the trio under the Kotatsu that Tohru won. With little to do at the end of year after Christmas celebrations, the Kobayashi joins Tohru and Kanna in enjoying the relaxing atmosphere of a year end without work. 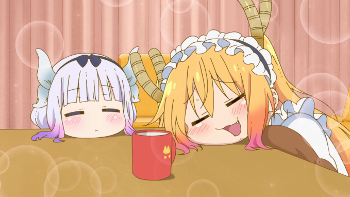 While the episode makes it a point to show others going home to see their families over the break, it points out that the Kobayashi household does as little as possible. Between preparing Mochi and other traditional activities she learned from the internet, Tohru also indulges whenever she can. It’s a scene I wish I had experienced many times over this past winter (but neglected to pick up a kotatsu myself).

The New Year’s activities are rather cliche and I would have almost preferred to see a trip to Comiket (held twice if you recall, in summer and winter) if not for the fact that I always feel like doing thos activities too whenever I see them. Dragon Maid has always been about Tohru learning human customs, and showing how much she enjoys them. Even when she pulls a Great Curse fortune she’s happy to simply be there with Kobayashi.

If there’s one semi-serious moment this episode it’s when Kobayashi steps away to take a call from her mom. Tohru is reminded that she didn’t visit home like others do, and Kobayashi’s reason is that she’s simply used to being away from home now. Tohru’s answer to the same question seems to be partly motivated by fear, judging from her ominous vision of what we can assume is her father, but is sweet nonetheless. After 11 episodes, viewers surely agree that no other place could be home for Tohru.

With the finale on the horizon I’m sad to know that this silly ride through family life is nearly at an end, but I’m very much looking forward to seeing an answer to what fans have wondered all season: Just how did Tohru end up with Kobayashi?

Good
– The comfort of a close knit family is on full display this week.
– Kanna in a kimono. What’s not to love?

Bad
– A bit light on humor comparatively, but not to the point where it breaks the show.